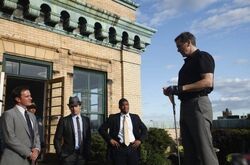 Previous Episode
Out of the Box
Next Episode
Need to Know

Withdrawal is the 1st episode of Season 2 of the series and the 15th episode produced.

A string of bank robberies are taking place across the country, and Neal and Peter must work fast in order to figure out who's behind them and stop the streak before it happens in New York.

Peter Burke is interrogated about the jet blowing up. He is asked several questions about who might have been responsible. He points them in the direction of Garrett Fowler. The session closes with Peter having his badge returned and his suspension lifted.

Peter exits to meet with Diana who has been working on getting information about Fowler's plans. She managed to decrypt a date, time and location from his hard drive and she and Peter are determined to be at that appointment to find out what it might mean. He then heads off to visit Neal Caffrey who has once again been incarcerated.

Neal is not enjoying his time back in prison and is frustrated that they suspect him for blowing up the plane and his girlfriend, Kate. Peter offers for Neal to return to his consultancy position, but straight out Neal says he needs to know who killed Kate. Peter anticipates this and says to Neal that he will find out and he will tell him, but that's that only way, implying very strongly that Neal should not risk his arrangement with the FBI by conducting his own investigation.

Mozzie arrives as Neal's lawyer and they discuss the option with nothing said to conclude either way.

Neal is dressed in overalls pushing a cleaner's cart. He cuts into a message delivery chute and inserts a message bottle. He pulls off his overalls in a lift to reveal a suit and steps out into a bank and introduces himself as the new employee. A kind employee, Pamela Smith, unknowingly helps him past the first point of security, Neal lifts her ID tag and carries on though to the vault helping himself to the cash, ditching any bundles that are marked with dye packs. He exits the bank and meets Peter and Jones outside. It's a demonstration of the bank's lax security.

Peter holds a meeting with the over-confident bank owners and managers, their security advisor, Renee, and Neal who lists the flaws in the system he just cracked. A serial bank thief, known as the architect, is on the loose, Dallas, Chicago and Boston have already been hit and this team is determined not to let it happen to Manhattan.

After the meeting Neal returns to his desk, his hands are shaky and he seems to be having trouble focusing. Peter meets Mozzie covertly in the park to discuss how Neal's handling the loss of his girlfriend. Both men are concerned about Neal.

Neal returns "home" to his rooms in June's house, she's glad to have him back. He and Mozzie start to work through the material they have on Neal, Kate, the Music Box, etc. The new "lady-suit" as Mozzie refers to her, Diana, had locked away the Music Box and they want to ensure it's still there.

They feel whoever was after the Music Box is likely responsible for Kate's death. Mozzie takes on Peter's advice and tries to keep Neal focused on the current Architect case and starts discussing "The Architect's" calling card.

Next day at the office, Neal is working with Diana on the case and Peter is impressed with their progress. They have managed to determine the name of a possible suspect and go for a visit. Edward Walker is hitting golf balls off his balcony into the Hudson River when Neal and Peter arrive. He offers Neal a shot and after a moment's hesitation Neal hands his coat to Peter. Neal asks him about art and Edward asks Neal about his anklet. Edward follows this by telling them he'd be happy to answer any more questions if they manage to get a warrant.

Diana has scouted the location of Fowler's mystery meeting and lets Peter know it's a blind zone and seems very surreptitious. This makes them even more keen to find out who Fowler was going to be meeting there. They make plans to go together. Peter heads off to lunch with Elizabeth.

Meanwhile Neal "runs into" Whitney, Edward Walker's PA, in a restaurant around lunch time and she invites him to sit with him. He and Mozzie work the situation, lift her mobile phone, make a copy of her SIM and then look through the contents. Mozzie has already determined that on the dates and times of the previous bank heists in Chicago, Dallas and Boston the appointments are not marked in his usual blue, they are marked in green - the colour of money. The next green appointment is set for the following day at noon - First Unity Bank.

Peter is not happy with the way the information has been acquired, but he's still going to act on it.

Peter, Renee and his team are staked outside the bank when an alarm is set off. It turns out to be a joke at the expense of Burke and his team. Edward arrives at the scene and remarks to Peter that it looks like he's busy. Edwards leaves for his meeting across the road.

Peter has been made to look ridiculous having trusted Neal's lead and the Bereau is cross with him. He and Neal go home to talk about the day and what went wrong. Jones calls Peter and tells him banks are being broken into all over the city, over 32 alarms have been set off in banks so far. They realise it's all a diversion and that by running the test previously they highlighted the weaknesses of First Unity's security and that is likely to be the next hit. They also realise that as Renee has the new codes for the vaults, she may also be in danger.

Neal and Peter race to the First Unity bank and break in through an alternative route. They are correct, Renee has been abducted and forced to open the vault and a team of masked men are robbing the bank. Neal tries to follow them out the back entrance as Peter rescues Renee and takes her to safety, but no luck.

Peter storms back into the office demanding to have Edward Walker brought to him. He's already there. Edward is delivering notification of the law suit that he will be bringing against Peter and the FBI.

In the debriefing room, Peter and Neal get back to discussing the case. Jones has reported that the heist cleared 8.2 million dollars. They work out that the cases couldn't have carried that much cash so there's $1.5 million un accounted for. They return to the bank to inspect the vault.

Renee takes them through to the vault and Peter asks to look at box 213. It's Renee's box and this clearly makes her nervous. As Peter opens the box, Renee pulls out a gun. She takes control by telling Neal to fill the bag with the cash. Peter and Neal get her talking about why and she confesses that Edward convinced her it was a good idea to get a cut instead of the mediocre pension she's get when retiring. Neal and Peter start to have an argument and it becomes very distracting, Neal brings his hands out of the bag and points them at Renee just as she is becoming really agitated and smacks two wads of cash together bursting the dye packs which spray into her face causing her to step back abruptly and hit the wall. The FBI tactical team enters, removes her weapon and cuffs her.

Neal and Peter take great enjoyment in arriving at Edward's house to have him taken into custody.

Mozzie and Peter meet in the park covertly again. They discuss that Neal seems to be doing well and the case seemed to help. Peter explains he can clean up a mess, but Mozzie can help prevent one. Mozzie refuses to "rat out" a friend. Peter asks Mozzie to look at him, and says genuinely, "He's my friend too."

Back at Neal's place, Mozzie visits Neal with news about the Music Box. He has discovered that the real Music Box has been swapped out for a copy.

Peter and Diana prepare for Fowler's mystery meeting and when Diana goes to her personal vault to get her weapon she is revealed to have the true Music Box.

Edward: "What do you consult on Mr Caffrey?"
Neal: "Investigations that involve my area of expertise."
Edward: "And what areas are those?"
Peter: "It's a long list."

Edward: "Oh, and er, Mr Caffrey. A suggestion for the next time you commit a crime; don't get caught."

Edward: "Oh if I did do it, do you think they would make me a junior FBI agent too?"