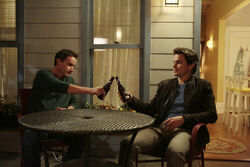 Whack-A-Mole is the 5th episode of Season 6 of the series and the 80th produced episode.

While tiptoeing through a mole-hunt, Neal is tasked to orchestrate a treacherous operation for the Pink Panthers on very short notice. Meanwhile, Peter is hard-pressed to balance his family life amid the fallout of a colleague’s murder.