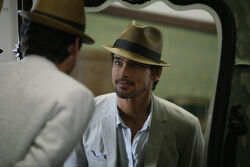 Wanted is the 1st episode of Season 4 of the series and the 47th produced episode.

On an exotic remote island, Peter must race to find Neal and Mozzie before a ruthless bounty hunter captures Neal and locks him away for good.

When we last left Neal, he had cut his anklet and made his great escape. Now, settled in to an island paradise off the coast of Africa, Neal and Mozzie go about creating their new lives. With unlimited funds at their disposal and the local fixer seeing to it that they stay off the radar, the future looks bright. Still, Neal can't help but feel a tinge of regret for the things he left behind in New York..

Meanwhile, back in Manhattan, Peter and his team try to get back to business as usual, but there are those that question how much of a hand Peter had in Neal's escape. Enter Agent Kyle Collins, a bloodhound from the Office of International Affairs known for going to dangerous extremes to capture his targets. Neal's run for freedom ruffled a lot of feathers in the Department of Justice, and Collins has made it his mission to bring Neal back, dead or alive.

Worried that the cowboy agent may be too much to contend with, Peter secretly searches for a way to find Neal before Collins. But when his investigation inadvertently tips Collins to Neal's whereabouts, Peter must make a hard decision about how far he is willing to go to protect his friend.