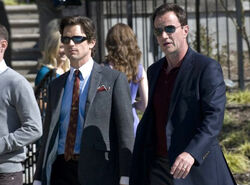 Vital Signs is the 10th episode of Season 1 of White Collar and the 10th produced episode.

Neal and Peter must investigate a clinic when June is approached about finding a kidney for her ailing granddaughter. A shady scheme to extort rich donors to find kidneys is revealed, and Neal and Peter must prove the existence of foul play.

The episode opens with June and Neal sitting on a park bench watching June's granddaughter playing soccer. June explains to Neal that her granddaughter is sick, and was taken off of the donor list for a new kidney. After a short pause, Neal asks how he can help and it cuts to Peter and El eating breakfast. Neal walks in and Peter, irritated by the intrusion asks El to do something. As Neal is searching through a cereal box for the toy inside (a plastic police badge) she offers him a bowl and Peter looks disgruntled. Apparently that wasn't what he had in mind. He asks why he's here, and Neal explains June's situation. A few days ago June was approached by some unknown organization saying that they can help her find a kidney for her granddaughter. For a $100,000 donation. Peter takes the case and tells Neal to get specifics from June, and Neal leaves. Peter reminds him that the badge isn't real, and Neal gives a non-committal sigh and leaves.

Next we see Neal putting on a tie in his house with Mozzie standing by asking about the case. Neal explains that he's set up a face to face meeting with a representative for the organization as June's financial adviser just as she pulls up to the house. Mozzie distrusts her claiming, "A New Yorker who does not take the subway, is not a New Yorker you can trust." Neal then points out that he himself does not take the subway which Mozzie then says proves his point exactly. Neal asks Mozzie to break into her car, which is parked outside. Mozzie refuses to do it in broad daylight, so Neal tells Mozzie to meet with the advisor instead while he breaks into the car. Mozzie reluctantly agrees.