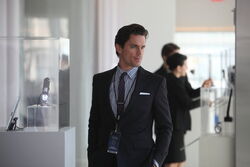 Vested Interest is the 10th episode of Season 4 of the series and the 56th produced episode.

Peter and Neal attend an FBI conference where someone is trying to steal high valued defense technology. They soon discover the thief's brazen plan to take something much more valuable from the FBI.

At an FBI conference, someone is attempting to steal some highly valued defense technology from the organization. Peter and Neal are in attendance at the conference and discover the thief's plan to kidnap the developer of the technology. Later, during Peter's private investigation of the "Sam" character, he learns that the real Sam is dead, but a DNA test shows that the man who they know as "Sam" is actually Neal's father.

Peter has apparently been looking forward to a leadership conference with the FBI, along with Neal, but their recent fight in Gloves Off threatens to ruin it. Although Neal is still not speaking to him, Peter tells him to fake it, which he does, although somewhat surly about it. He tells an inappropriate story about Peter impersonating a priest.

Neal, although still angry, attempts to get back on Peter's good side at the request of Mozzie. He gets back in his good graces by using the coffee machine Peter had just fixed.

A weapons designer from a foreign county comes into the FBI office. He had a panel at the convention for his new bulletproof vest. It apparently is slim and lightweight, but being shot while wearing it apparently feels not dissimilar to a firm hug. He makes a flirting comment to Diana about it, but Peter. being the bro he is, subtly shoots his mygnostic butt down with a comment, although she could have handled it herself, we appreciate the thought, Peter.

They think someone is out to get the revolutionary technology in the vest and need someone to protect it.