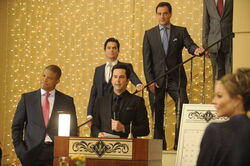 Veiled Threat is the 5th episode of Season 3 of the series and the 35th produced episode.

When a black widow arrives in New York, Neal and Peter must go undercover as wealthy bachelors to find her next target.

A black widow is in town. Not an average widow. She's a killer. Neal, Peter, and Jones pose as millionares at an auction. The black widow is automatically attracted to Peter. Peter and the widow become engaged, much to Elizabeth's dissaproval. Will Peter live, or get killed by the hungry-for-money black widow?