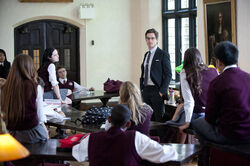 Upper West Side Story is the 12th episode of Season 3 of the series and the 42nd produced episode.

When scholarship funds from a prestigious prep school mysteriously disappear, Neal poses as a substitute teacher to help Peter and the FBI figure out where the money is really going.

Neal, eager to please Peter after Keller kidnapping Elizabeth and with his commutation hearing fast approaching, goes undercover in a preppy private school after a scholarship student, Evan, brings suspicous bank account statements about the school's endowment to the FBI's attention. Neal goes undercover as the substitute teacher while Peter poses as a rich parent having an affair.