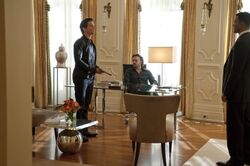 Previous Episode
By the Book
Next Episode
In the Red

Unfinished Business is the 5th episode of Season 2 of the series and the 19th produced episode.

A routine bond theft escalates into an attempted murder when Neal is unknowingly hired to kill the assigned insurance investigator, Sara Ellis (Hilarie Burton), the same woman who had testified against him regarding his alleged theft of a Raphael painting a few years earlier. Meanwhile, Neal and Mozzie investigate the jet's wreckage, concluding that the jet was rigged to explode midair, but was detonated early by someone. They manage to have the cockpit's voice recorder sent to the insurance company Sterling Bosch, under the care of Sara Ellis. After taking the impostor who ordered the hit on Sara, Neal tries to recover the package from her apartment, but is interrupted by an assassination attempt by the real assassin, who is subsequently captured by Peter and his team.

Neal: She pointed a gun at my face!

Mozzie: And cocked it?

Mozzie: You've come back from worse.