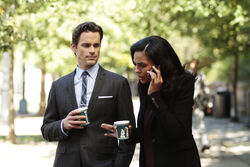 Previous Episode
Shot Through the Heart
Next Episode
Diamond Exchange

Taking Stock is the 12th episode of Season 5 of the series and the 73rd produced episode.

When a corporate espionage case has personal ties to Neal, Peter recruits Diana from maternity leave for an undercover sting on a rogue stock trader.