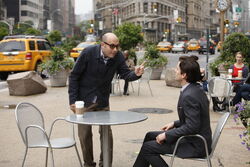 Previous Episode
Scott Free
Next Episode
As You Were

Taking Account is the 7th episode of Season 3 of the series and the 37th produced episode.

After a hacker emptied a whole lot of bank accounts, Neal and Sara take the action in their hand by trying to lure out the hacker to the disliking of Peter.

When an expert hacker drains a prominent New York bank, Neal assumes the criminal's identity in order to spend the pilfered fortune and draw him out of hiding. Mozzie finds himself in an unfamiliar situation when the hacker's former accomplice (Lena Headey) switches sides. Meanwhile, Sara temporarily moves in with Neal and discovers the surveillance camera footage of Neal and Mozzie's stolen treasure.

Neal and Sara are seen walking down the street to the bank. Sara asks Neal to turn around while she inputs her pin. He claims that no pin is really random and that he could guess the number. Disbelieving, she lets him input the numbers. He does, claiming many reasons for the random string of numbers. She accuses him of just reading the numbers in the screen's reflection, to which he admits. Laughing. she opens up her bank account. She immediately grows concerned and asks Neal if he did anything else while using the screen. When he says no and asks why, she says that her account is completely empty.

They reach the Beaureu and find out that the same hacker emptied vaults all across NYC. The suspect's name is Duponte. He stole a total of $125 million and if the FBI are not able to catch the thief before he spends the money, it will all be lost. Neal offers Sara to share his room, much to the amusement of Peter.

Neal, Mozzie, and Sara develop a plan without Peter's knowledge. The plan is for Neal to go undercover as Duponte, Mozzie to make a distraction, and Sara to go undercover as a bank worker. Neal gets hold of a code to change Duponte's security information, therefore he is able to answer all security questions and withdraw Duponte's money. Then, he and Sara go on a spending spree. Their first purchase is 4 helicopters.

Peter finds out about the the plan Neal, Sara, and Mozzie came up with. Peter gets very angry and Neal and Mozzie end up at hs office tryng to contact the vulture for a meeting. They succeed, the deal is to meet with the hacker while promsing her full immunity, which is promised by Mozzie before Peter even agrees to it, though he eventually agrees.

Neal, Mozzie, and Peter are in a car trying to find the vulture, aling with a number of undercover agents, when they get a text from an unknown number telling them that they have arrived. They try to find the hacker: but it turns out they were looking for a man the whole time when they should have been looking for a woman. She tells them to send out the handsome one to meet wth her, and it turns out that she's reffering to Mozzie. He gets out to meet with her, but shots are fired from an unknown individual. The Vulture then tries to flee and all agents + Neal & Mozzie run after her. Diana catches her and they take her to the FBI's facility.

At the FBI facility Sally, the vulture, admits that she worked with a man named Kurt to create the virus. She also believes that he was the one who fired the shots because he thinks she's depleting his bank account money. Mozzie tries to say he was against the whole plan because he's acting as her lawyer, but Neal shuts him up and apologises to Sally. She claims that she was only taking a part in it because she wanted to expose the corruption in corporate companies by releasing their ban statements, she was never going to be a part of the robbery.