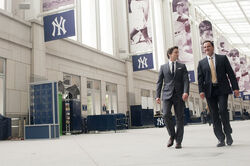 Stealing Home is the 15th episode of Season 3 of the series and the 45th produced episode.

When a wealthy Yankee fan recruits Neal to help steal a prized piece of memorabilia! Neal Caffrey is reminded of what life could be like again as a high-end thief.

"If you work hard and swing for the fences, anything is possible."
―Peter[src]