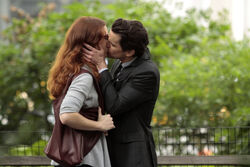 Shot Through the Heart is the 11th episode of Season 5 of the series and the 73rd produced episode.

When Neal and Peter go after an assassin, the stakes are raised even higher when they realize this may be the same person who has been pulling Neal’s strings.

Retrieved from "https://whitecollar.fandom.com/wiki/Shot_Through_the_Heart?oldid=15930"
Community content is available under CC-BY-SA unless otherwise noted.