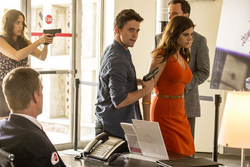 Shoot the Moon is the 14th episode of Season 4 of the series and the 60th produced episode.

Peter and Neal work from different angles as they attempt to stop a thieving duo bent on going out in a hail of bullets rather than watch their whirlwind relationship fade away behind bars.