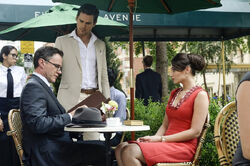 Return to Sender is the 2nd episode of Season 6 of the series and the 77th produced episode.

The FBI agrees to grant Neal his freedom if he can bring down the Pink Panthers once and for all.

Retrieved from "https://whitecollar.fandom.com/wiki/Return_to_Sender?oldid=15058"
Community content is available under CC-BY-SA unless otherwise noted.