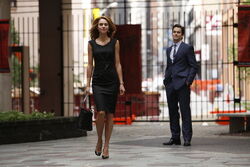 Pulling Strings is the 14th episode of Season 3 of the series and the 44th produced episode.

Neal gets a taste of what his ideal life in New York might be like when he is assigned to work a case with his ex-girlfriend, Sara Ellis.

In an episode that sees Sara Ellis' return, the insurance investigator returns for a case of a missing violin. The suspect is a man that later is revealed to be Sara's ex-boyfriend, who is also her boss. Sara must go back to him for the case, much to Neal's displeasure.