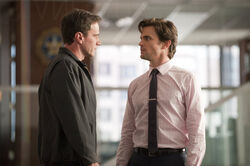 Previous Episode
In the Red
Next Episode
Company Man

Prisoner's Dilemma is the 7th episode of Season 2 of the series and the 21st produced episode.

Peter and Neal are asked to assist the US Marshals in tracking down a potentially rogue FBI agent.

☀Who is accused of selling witness locations during criminal trials, and the U.S. Marshals ask Peter and Neal for help tracking down the suspect. Peter winds up befriending the suspect upon discovering that the U.S. Marshal in charge of the investigation is actually selling the locations, and goes on the run with him trying to clear his name. Moz discovers that the mystery voice on the black box recording belongs to the still-in-hiding Garrett Fowler.

The U.S. Marshall's enlist the help of Neal and Burke to help track down a fugitive F.B.I. agent, who is suspected of trying to access the witness protection database. After Burke reveals the reason for the suspects downfall in the F.B.I. was due to an unsanctioned relationship with a C.I. Neal reveals that the suspect, Agent Jack Franklin, is possibly using his former C.I., a former con-artist herself, to hide from the Marshall's.

Upon visiting Agent Franklin's former C.I., Rebecca, they discover that she had possibly used her position at a high-end car dealership to take a test drive to meet with Franklin. Marshall Deckard inquires about them questioning Rebecca, although he shouldn't have known about the meeting. Agent Franklin shows up at Burke's house, knowing that he can trust his former colleague. Franklin reveals that Deckard is the one who has been selling out witness protection clients. Franklin and Burke chase down a lead, and find Deckard there destroying evidence. Deckard fires upon Agent Burke and Franklin. They narrowly escape and go into hiding with Neal and Jones' help.

Meanwhile, Neal is going around the office trying to convince other White Collar agents to chaperone him to a high-end art exhibit.

With the help of Mozzie, Agents Franklin and Burke decide to pull a con on Marshall Deckard. They pull a "Prisoner's Dilema," pitting two suspects against one another, hoping that one will turn on the other. Using Volkert, the attorney helping out Deckard, and Rebecca, Deckard reveals his hand and is arrested for selling out witness information in order to achieve convictions.

With Franklin's name clear, he is reinstated into the White Collar division. Mozzie reveals to Neal that the phone call Kate made on the plane was with Agent Fowler. Neal is asked by Peter's boss, Bancroft, to go to the exhibit, further instilling the F.B.I.'s trust in him.