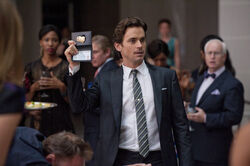 Previous Episode
Payback
Next Episode
Under the Radar

Power Play is the 15th episode of Season 2 of the series and the 29th produced episode.

Peter and Neal switch identities to solve an energy case.

Elizabeth Burke is planning an event for the high-strung Andrew Stanzler (Richard Schiff). Stanzler's assistant, Brooke (Cody Horn), pulls Elizabeth aside and tells her Stanzler is up to no good.

Meanwhile, New York is experiencing a heat wave and blackouts are occurring across the city. Elizabeth comes home to Peter who is installing a new air conditioner. She tells Peter that Brooke believes Stanzler is behind the mysterious blackouts and Peter agrees to look into it. They make plans for Peter to meet Brooke at the gallery while Stanzler is out on a business trip. Elizabeth also manages to convince Peter to bring Neal because of his "calming smile" since Brooke is skittish about the whole thing and doesn't want to get caught snooping around.

At the gallery, Neal, Elizabeth and Brooke are waiting for Peter to show up. Neal calls Peter who was delayed by having to drive Diana's car and being stuck in New York traffic, but he reassures Neal he'll still be a couple of minutes early. Brooke informs Elizabeth that Stanzler was unexpectedly arriving at the gallery. Brooke gets scared so Neal poses as Peter in order to get Brooke's trust so she can help with the case.

Peter, unhappy with Neal's decision to impersonate a federal agent, tells Neal that Brooke needs to meet the real Peter Burke. Elizabeth calls Peter and convinces him to let Neal keep his cover due to Brooke being so nervous. Peter poses as Neal.

Brooke reveals that Stanzler is looking for a guy to help him steal a flash drive out of Francis Luntz's (J Tucker Smith) house while Stanzler is in a meeting with Luntz. Luntz doesn't fully trust Stanzler and secretly recorded their first conversation. Stanzler wants the flash drive that has incriminating evidence of him conspiring with Luntz.

Peter, posing as Neal, meets Stanzler and convinces Stanzler he's the right person for the job of stealing the flash drive.

Peter shares his task with the team who plan a stakeout in the van in case something goes wrong. Peter asks Neal to teach him how to break into the house and steal something.

Peter is sent to Neal's place to learn how to drop a bug, pickpocket (in this case, to retrieve a bug) and pick a lock. Mozzie is Peter's teacher for the night and June (Diahann Carroll) stops in to help with the pickpocketing lesson. She brings in Byron's (June's late husband) training jacket that has bells. Peter's job is to retrieve the bug from the pocket without jingling the bells. It is revealed that it's best to use the index and middle finger "like tweezers" so that the "thumb never touches the mark."

The next day, Neal, Jones and Diana are in the stakeout van while Peter is with Stanzler. Peter finds the flash drive and makes a copy for the FBI.

From the bugged conversation and the flash drive, the team learns that energy worker Chip Wheelock is also being dragged into the blackouts. The team plans to take down all three guys — Stanzler, Luntz and Wheelock — at an event Peter was invited to and Elizabeth was planning.

At the event in the gallery, Peter is still undercover as Neal and Neal accompanies Elizabeth as Peter. When Stanzler arrives, Peter is taken to Stanzler's private collection downstairs. His task was to look after Luntz, who was already locked in the room. Peter soon finds out that Stanzler played them both because Luntz was told Peter was Chip Wheelock. Peter warns Luntz and the rest of the FBI team that the gallery was in the next blackout grid, and Stanzler's plan was to kill both Luntz and Peter without video evidence.

The team inside the gallery quickly tries to get to the backup generator, but the blackout happens before they can find it. Neal uses Peter's badge to help gain access to things in the building. Peter tries to lock-pick his way out of the room, but is warned by Jones that Stanzler is in the room and has a gun.

Stanzler starts to shoot and Peter and Luntz try to move to a safe place. The backup generator is turned on and the team comes in to arrest Stanzler.

Peter and Neal stand outside of the gallery. Peter states that he probably had a harder time fitting into Neal's life than Neal fitting into his life, though he admits he had fun being the infamous Neal Caffrey for a little bit. He and Neal give each other a quick hug and Peter pickpockets Neal to get his badge back. Elizabeth walks up to Peter and gives him his wedding ring back.

Neal runs into Sara Ellis (Hilarie Burton), who had just came home from Argentina. While in Argentina, she discovered that Vincent Adler (Andrew McCarthy) is obsessed with a guy named Gerhard Wagner but she doesn't know why. Neal and Sara plan to find out who Wagner is and why Adler wants him.

Diana gives Peter a case file on Wagner whose files are classified. Peter

Neal and Mozzie start working on building the fractal antenna, only to be interrupted by Peter and Sara who have found information on Wagner. It is revealed that Wagner was a radio operator in the U-Boat headquarters and had some top secret information he wanted to share with the U.S. Wagner was sent to a detention center at Ellis Island, but escaped shortly after, giving him the freedom to change his name and live a new life. The four plan to investigate that and look through the archives for more information.

Neal walks Sara home and they discover that Sara was being followed. Neal realizes that he showed face, so whoever followed Sara knows Neal and Peter are working with her.

Neal and Sara enter the archives and the two realize finding Wagner's file was going to take a while. In the middle of going through thousands of files, Neal gets frustrated. Sara tells Neal she understands what it's like to live in a mystery. She reveals that her sister ran away and she never found her. She hopes that finding the mystery behind Wagner will give Neal some closure with Kate.

The next night (the night of Stanzler's event), Mozzie is with Sara. Sara asks Mozzie if Neal sent him for protection, but he neither confirms or denies it. The lights go out and Mozzie decides to go discover, leaving Sara alone at the table.

After catching Stanzler, Neal goes back to the archives and brings Sara some gourmet finger food. The power goes out and Sara reaches for the extra lantern Mozzie gave her. Neal and Sara start kissing until Mozzie interrupts with his big discovery. As Neal and Sara button their shirts back up, Mozzie says that he found Wagner.

They discover that while Wagner is dead, he has one surviving family member — a granddaughter who is revealed to be Alex Hunter (Gloria Votsis).

In the last shot of the episode, Alex is finishing up a phone call with someone. When she hangs up and walks away, a person in a black hoodie (the same person who followed Sara home) is seen following Alex.

Matt Bomer and Cody Horn (Brooke, Elizabeth's friend) worked together again in the 2012 film "Magic Mike." Horn played Adam's (Alex Pettyfer) older sister and her name was Brooke, which is the same name as her "White Collar" character.

"Oh I'm too late. The metamorphism is complete, cockroach."
―Mozzie[src]