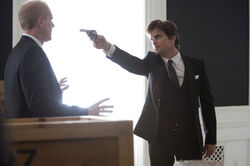 Point Blank is the 9th episode of Season 2 of the series and the 23rd produced episode.

Neil and Peter are in Neil's place and meets Alex. Peter leaves knowing Neil does not want him there. Alex and Neil begins talking and later begins taking clothes off. They do it on the bed and wake up lying without any clothes