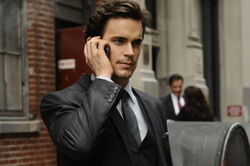 Payback is the 14th episode of Season 2 of the series and the 28th produced episode.

Peter is kidnapped by an old enemy of Neal's and locked up. Neal has to rescue him in time.

Peter: Relax, we're not going to release Keller on an anklet. Unless June has a spare bedroom.

Neal: Why is there a tree on your dashboard?

Diana: It's a hybrid, shows me how efficiently I'm driving.

Neal: You're not driving very green. All your leaves are falling off.

Retrieved from "https://whitecollar.fandom.com/wiki/Payback?oldid=15464"
Community content is available under CC-BY-SA unless otherwise noted.