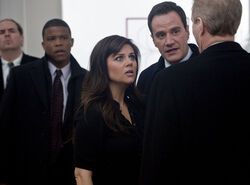 Neal and Alex try to get their hands on the music box while Peter seeks his help to get finally rid of Fowler.

Alex and Neal meet in a swimming pool for a cheeky late night dip. She says the music box is in the Italian Consulate, in a private safe. She won’t give any further information. As Neal discusses these details with Mozzie, they establish they can’t possibly do it without her. Mozzie points out Peter is not going to be releasing him from his anklet any time soon. Neal says Agent Fowler will. He wants the music box, so he’ll need to help Neal where he can to make it possible. Neal calls Fowler’s office and leaves a cryptic message for a meeting.

The next morning, Peter is at home with his wife, Elizabeth, looking over Neal’s tracking data. He suspects Neal might be casing a certain area and thinks he’s after the music box.

Neal meets with Fowler in a garage. The untrusting Fowler brings a fellow agent who frisks Neal in case of a wire. Neal makes his proposall. Cut the anklet, Fowler gets the box, and he never hears from Kate and Neal again. Fowler acts shocked Neal could possibly be suggesting criminal activity and leaves. Neal walks off and the camera pans out to see Peter sitting in a car watching, curious and somewhat worried.

Mozzie, Alex and Neal are in Neal’s apartment working on a plan. Mozzie is being particularly paranoid about the venue being a consulate “A little piece of another country”. Alex is looking to get herself invited by a man without a “plus one”. Mozzie will be part of the catering crew. Neal will be making a very generous donation to the Italian people to get in to the party.

June knocks on the door and advises Neal that Peter is on his way. They manage to cover the evidence of their meeting but Peter busts in, frustrated, annoyed and mad with Neal that he’s willing to blow the chance at a better life Peter has managed to arrange for him. Neal says it’s not the life he wants.

Back at the office, Fowler can see Burke is watching him and Neal very closely. He makes a call and advises the person on the other end that “Mentor” is moving forwards, but Agent Burke may get in the way. Fowler refers to the other person as Sir and says he can take Burke out of play as long as he remembers the deal. Fowler gets the box and this is over.

Neal is at home working on a sculpture. Alex arrives from having an enjoyable day with the Duke she has picked to be a plus one for. She wants to discuss the anklet, but Neal doesn’t want to talk. He gets her a glass of wine and they start to reminisce. Just as the conversation is beginning to get uncomfortable, Neal hears a small beep and sees the little light on his anklet is off. He’s a free man.

Fowler busts in on Elizabeth in her office with a warrant to search for contraband. She calls Peter, who is in a conversation with Jones. Jones thinks his phone is being tapped; he can hear those little clicks and he’s suspicious. Elizabeth tells Peter the FBI are tearing apart her office. Peter and Jones race to her office and try to confront Fowler. Both Elizabeth and Peter lose their cool ending with Peter punching Fowler in the face and causing a bloody lip. Fowler grins as he calls for Peter's arrest for assaulting a Federal agent. Peter turns over his gun and badge. Fowler arranges for Peter to be suspended.

When Elizabeth and Peter return home, they are out on bail. Peter is suspended for two weeks. She is in a mad panic about the effect this will have on her business and reputation. Peter pulls her into a hug to calm her down and comfort her. Peter receives a call from Neal who tries to apologise, but Peter isn’t interested. Peter is furious and tells him he’s on two weeks house arrest when he hears a knock on the door. It’s Neal.

Neal and Peter are talking, Neal is trying to make Peter believe he truly had no idea Fowler would aim for Elizabeth to take Peter out of the equation. Neal shows Peter his anklet. The light is gone, but Neal has already spoken with Jones and found out it is transmitting he is at home. Peter can’t understand how that can be. Peter also can’t understand why Neal is willing to risk so much for this music box which is maybe going to lead him to Kate. Neal explains. He has to know if Kate really wants him and is using Fowler or is actually working with Fowler and just wants the music box. This is the only way to find out. Peter wants to get Fowler’s badge the way Fowler has taken his. They realize this music box plan will help. Fowler is now aiding Neal in illegal activity and that’s the first key.

Neal has made his donation to the Italian consulate; it’s the sculpture he had been working on. This allowed him to view the security inside and the vaults. Everything is in order. Mozzie has the honors of cutting Neal’s anklet. Mozzie says a toast and then, snip.

Meanwhile, Peter has met with Diana, reposted to DC. She agrees to help him get the FBI info he needs. They try to figure out how Fowler is manipulating the data for Neal’s anklet. They decide he must be doing it from OPR offices. Diane has to get in there.

Neal arrives at the party and is greeted warmly. When Neal asks to see where his donated statue has been positioned, he is denied access as it is secure. Mozzie is working the rounds as a waiter and Alex is dazzling her Duke, when Mozzie “accidentally” drops a glass near to her as she lifts the security pass from one of the Consulate employees which she then slips to Neal. Neal then takes his glass, calls the room to attention and in a bizarre toast he introduces himself as an internationally renowned art thief. He explains he is here tonight to rob them and raises his glass. People laugh uncomfortably with some confusion, then go back to their business. Consulate employees look confused and unimpressed. They proceed to escort Neal from the premises, apologizing that one of their guests has had too much to drink.

Alex starts planting small devices which look like lipstick in pot plants around the reception area. Neal is taken to a back room and questioned seriously. When he proves uncooperative, they punch him in the stomach. Alex sets off the devices, which are small crackers that make a noise and some smoke. They distract and disturb everybody. Mozzie fixes security while Neal busts into the area where the Consular’s office is, smashes open the statue and takes out a safe breaking kit. He gets to work on the safe immediately. It's not long before Neal claims his prize – the music box.

Alex meets them, hugs Neal and lifts something from his pocket. Mozzie is panicking as security closes in. Alex grabs the bag and slips off, leaving Mozzie and Neal to look after themselves. He’s been double crossed.

Neal and Mozzie manage to escape. Neal arrives home to his apartment to find Peter waiting. Peter wants Neal to confirm, as best he can, they are still on the same side. Peter leaves, telling Neal he’s working on something. Diana is still tailing Fowler, when he meets with Neal for the swap. Fowler still doesn’t explain why he needs the box, but tells Neal his new legal identities for Kate and himself are in the folder. Diana is hacking into his computer at his office and downloads the Mentor file.

Neal is walking along with Mozzie as they discuss that Neal will be able to disappear and not be found. There is a somewhat bittersweet moment as they realize they may not see each other again for a long time, if ever. Mozzie asks if he will be saying good bye to the Suit, to which Neal doesn’t reply. They say a heartfelt goodbye to each other.

Elizabeth arrives home to find a bouquet of flowers on the table in a vase. There is a note in the flowers with the message, “Speed Dial #1”. Neal answers and explains he has arranged a fantastic deal for her promotions company. He says goodbye and throws the cell into a street trash can.

Diana is walking to the car park as she calls Peter, telling him she has everything on Mentor. She walks into the garage to find Fowler there, who pulls a gun on her. Peter arrives just behind her and pulls a weapon on Fowler. Diana pulls her weapon and it seems to be a heated standoff until Peter fires two shots at Fowler, in the chest. Luckily for Fowler, he was wearing a vest. They cuff him, drill him and threaten him for info on where Neal might be headed. He directs them to an air strip near the Hudson.

Peter gets to the air strip just in time to catch Neal before he gets on the plane. Kate can be seen in the plane’s hatchway. Peter wants a few answers from Neal first. He tries to convince Neal there is a lot of good he could be doing by staying with the Bureau, but Neal can’t be swayed. Just as he goes again, Peter asks why Neal said goodbye to everyone but him. After more prodding, Neal confesses it was because Peter was the only one who could have changed his mind. Neal still walks towards the plane, but hesitates a moment. He faces Peter again. The plane explodes in a furious fire. Peter restrains a shocked and tortured Neal from running to the impossible aid of his love, Kate, from the burning fireball which was supposed to be their freedom.

"We feel free when we escape, even if it be but from the frying pan into the fire. -Eric Hoffer"
―Mozzie[src]

Retrieved from "https://whitecollar.fandom.com/wiki/Out_of_the_Box?oldid=15485"
Community content is available under CC-BY-SA unless otherwise noted.