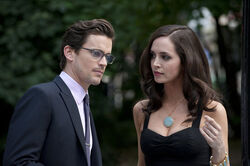 Previous Episode
As You Were
Next Episode
Countdown

An Egyptian amulet surfaces in New York and is connected to the criminal Keller who is smuggling artifacts into the city. As Neal is undercover it becomes clear that Keller is more interested in a different treasure.

With Mozzie growing increasingly anxious and Sara distancing herself, Neal tries his best to keep a lid on the secret of the treasure. But staying cool becomes a lot more complicated when Matthew Keller resurfaces. Word is that Neal's old nemesis is back in connection with an Egyptian amulet that has been smuggled into Manhattan, but Peter and Neal share the sneaking suspicion that only one thing would be worth enough for Keller to risk returning to New York: the treasure.

Hoping to finally bring Keller to justice and return the amulet to the Egyptian government, Neal has his old friend Hale set a meeting with Raquel LaRoque, a sexy Egyptologist rumored to have smuggled the ancient artifact into the country. Neal manages to gain Raquel's trust, but when Hale turns up dead, Peter and Neal worry that Keller is closing in.

However, Keller is already nearer than either of them imagine. Posing as an Interpol agent, the cutthroat con spooks Sara into giving up the IP address of Mozzie's treasure cam. Worried the warehouse has been compromised, Neal tells Mozzie to secure the art while he deals with his longtime enemy. However, with one friend already dead, Mozzie has no intention of sitting idly by while Keller goes gunning for Neal. Little does he realize that the drastic actions he sets in motion may well be their undoing...