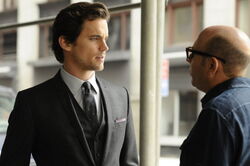 Previous Episode
Under the Radar
Next Episode
Where There's a Will

On Guard is the 1st episode of Season 3 of the series and the 31st produced episode.

Despite successfully escaping after having robbed the Federal Reserve, a notorious thief returns to retrieve the stash he left behind.

The episode begins with Neal and Mozzie loading packages from the submarine that they got the treasure from into an airplane. Just as they are about to leave, Peter, Diana, and Jones follow them quickly. They are in air, and Mozzie says they aren't going to make it. The scene ends with Neal saying they have to.

It starts Peter and a re-cap. Peter thinks that Neal stole the stuff from the submarine.

It begins when Neal walks into his bedroom-apartment and sees a Hawaiian bobble-head. Her name is Lolana. Neal holds up a type-written message which showed him a time, address, and a key, It unlocks the place where Mozzie was keeping the stash of treasures from Argentina. Neal hesitates on leaving Peter again, but he reluctantly agrees to it.

Neal gets a new case in which he meets an old friend from an alias, called Gary. They fence and they talk about Lawrence's recent crime, stealing $60 million and hiding it from the feds. They fence and Caffery wins, while getting a deal of 20% of the money and helping him escape. Off-anklet, Neal teaches Lawrence the four steps of his getaway plan. Quietly, the step three is actually the place where Peter arrests Lawrence.

Along the way, Peter brings the piece of Neal's paintings that wasn't burnt in the fire. He brings it to Elizabeth, who was at a gallery while she worked before quitting and joining a party-planning business. Mozzie and Neal switch out the piece of painting into a fake one from the 1930s.

Meanwhile, Mozzie sets up a get-away plane, but ends up being used by Lawrence as a back-up plan, because Jones ruined it. They almost make it, but Mozzie stops the plane, so Diana and Peter catch them.

Peter comes home, and Elizabeth shows him the results from the fake piece of burnt painting and it shows him that it was part of the submarine. Later, he arrives at Neal's house and he picks up the painting of the Chrysler building. But Diana shows them a list from the 1930s. So, if the person who has the paintings still has them, then they will figure them out by looking at the list.

"Think of it like a Kardashian. What it lacks in talent, it makes up for in cargo space."
―Mozzie[src]