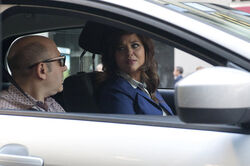 Neighborhood Watch is the 13th episode of Season 3 of the series and the 43rd produced episode.

When Elizabeth overhears one of her neighbors in a suspicious conversation, her curiosity leads Peter and Neal to uncover a robbery plot against a posh Manhattan Hotel.

After Peter Burke leaves a scanner at home, Elizabeth overhears plans for a robbery. She alerts Peter immediately, and he sends agents to check it out. Peter visits the scene of the alleged crime out of curiosity, but finds nothing to suggest that the robbery exists. Neal and Peter attribute Elizabeth’s actions to paranoia stemming from her recent kidnapping by Matthew Keller. However, Mozzie believes that the robbery was real, and begins helping Elizabeth monitor Peter’s scanner. Mozzie and Elizabeth soon hear the same voices from the original transmission, and discover that they are the voices of the Burke’s new neighbors, Ben (Manganiello) and Rebecca Ryan (Lola Glaudini).

Mozzie and Elizabeth call Neal for backup, and although he tries to get them to call Peter, he eventually agrees to help when Elizabeth tells him she doesn't want Peter to worry. Elizabeth immediately visits their house, coercing an invitation for dinner that night by giving them fresh produce from her garden. She also lies and claims that the Burkes are redecorating their kitchen. Elizabeth doesn't tell Peter about her plan, but convinces him to go anyways. While at dinner, Elizabeth excuses herself from the table in order to search the house. She discovers nothing, but soon finds herself locked in a bedroom.  Neal, speaking to her through a window, walks her through picking the lock. However, she is soon found by an annoyed Peter.

Peter finally agrees to investigate the Ryans, quickly being informed by Diana Berrigan that Ben has an armed robbery conviction. As Peter phones Elizabeth to let her know that she was correct, Ben visits the Burke home and vaguely threatens Elizabeth. Clinton Jones follows Ben and discovers the identity of Ben’s partner: Connor Bailey. In order to get closer to the suspects, Neal visits Ben’s parole office under the alias Nick Halden. Using information gathered by Neal, Peter quickly realizes that the target of the heist is a luxury hotel. Peter and Neal hurry to the hotel, barely missing Ben and Connor. At the Burke home, Elizabeth and Mozzie follow Rebecca as she leaves the house. Realizing that Peter will not reach them in time, Elizabeth approaches the Ryans as an FBI agent. Her attempt fails just as Peter and the FBI arrive.

Mozzie (to Elizabeth): Seriously? You're a bad influence!