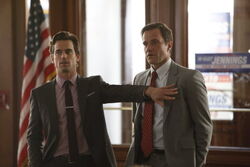 Need to Know is the 2nd episode of Season 2 of the series and the 16th produced episode.

Agents Peter Burke and Diana Barrigan are at the location for Fowler's Mystery Meeting. It's 20 minutes after the meeting time and no one has turned up. Then out of the shadows steps a man covering his face with a newspaper. Peter identifies himself as an FBI Agent and the man makes a run for it, Diana and Peter chase but the man shakes them.

Neal Caffrey arrives for work at the Bureau office, Peter gives him the details on the new case they'll be working. They watch a TV interview with a potentially corrupt politician, Senator Gary Jennings. His assistant, Dylan, thinks he may be illegally funnelling money into his campaign and has come to the FBI for help. He has noticed secret meetings, two sets of books are being kept and this all started after an influx of monetary donations to the campaign. They need a way to get Neal into a trusted position within the campaign to investigate further.

Neal's plan is "Bad Cop, Good Criminal" and he convinces Peter it's a good idea. Peter enters Gary Jennings' office, identifies himself and says he making enquiries into a scheme that Jennings knows he was cleared of at an earlier date. They are hoping this may spook Jennings into worrying that an investigation will unveil what he's really up to and hire a "Fixer"; enter Neal Caffrey.

Dylan calls Peter to report that his performance was effective. Jennings has freaked out and called an immediate war room. It's time for Neal to make his move.

The fallout from the meeting is that Jennings contacted the FBI and tried to get Peter fired. He's panicked and he's also looking for a Fixer, just as Neal predicted he would. Dylan has been able to get Neal's name on the list, so now Neal needs to learn all about his new alias, Benjamin Cooper and sell it to Jennings as the best guy of the job. The alias background is thorough, a 4.0 from Harvard, Valedictorian, year book included.

Neal meets with Jennings and Reggie, pitches his idea for fixing the problem, sells hard and gets the job.

Later that evening, Diana arrives at Peter's house with photos and stills they managed to acquire during the mystery meeting. Diana has come from dinner with her girlfriend Christie, who is having trouble adjusting to living in New York. There's not much to go on in the photos, but they've managed to get a few parts of his face and have compiled a Picasso style compilation. It's currently being run, discreetly, through facial recognition programs. Diana confirms the real Music Box is safe and asks Peter if he's sure he doesn't want to know where it is. Peter is certain, it's safer for all if he doesn't know.

Peter closes the curtains, saying that this guy they're after is clearly a professional and seeing as they are after him, he may now be looking for them. A man in the bushes outside is taking surveillance photos, it's unclear as to who it is.

Dylan greets Neal as he arrives for work at the campaign office. Jennings hasn't arrived yet and Neal is keen to look through his office. Dylan is concerned about being able to distract the Senator, but Neal is headed into the office anyway. Neal breaks in and takes a photo of a match book that he finds in the desk drawer with the words "CiNNaMoN 212" printed on the inside. He makes it out of the office just as the Senator arrives. Neal asks Jennings for a light, but he doesn't smoke, he also asks to be paid off the books, Jennings thinks he can make that happen.

Peter receives a call from Neal confirming he got the photo of the match book and tells him the words that were written inside. Peter finds that the image is a flower representing the goddess Aphrodite and is linked to several businesses including an escort service. Elizabeth calls from out of town, missing her husband and Peter keeps working while talking. He tries entering the word as a password to the escort service website which activates a seductive introduction to the service. It's loud and suggestive and Elizabeth asks Peter what's going on, he snaps his laptop shut and promises it's for research.

Neal is chairing a meeting with the Senator's team fixing as he's been hired. The campaign team is not real clear as to what's going on and why it will work, but Jennings outright tells them to trust what "Ben Cooper" is saying. The meeting is interrupted when Reggie enters, he has something he feels will help them get Peter off their back. Reggie pulls out photos of Peter in his home with a woman, dressed up nicely that they have confirmed is not his wife, Elizabeth Burke. Neal recognises her immediately as Diana and works to start incorporating her in the plan. He says, Burke is a control freak, she's probably a hooker, rather than an affair - an affair would be too sloppy. He suggests they get her under their thumb and use her to get to Burke.

Neal shows the photos to Peter and explains what he told Jennings. Peter calls in Diana and tells her about her new role in the case. She takes it in her stride. Neal thinks Peter lied and is hurt. Peter denies lying.

Mozzie and Neal are in the apartment at June's house discussing what they think Peter is up to. Neal suspects that Peter is investigating who killed Kate in his off hours, and Mozzie points out this is probably a good thing, but Neal wants to know what he's found out. Mozzie thinks it's for Neal's protection and also feels that there's a "certain universal synchronicity" to the balance that the suits have their secrets just as the cons have their's.

Diana is dressed in a stylish hot pink mini dress and looks amazing. She is greeted by Robert Barrow who thinks they can do some business. First, she must pass test. He gives her the key to the penthouse, she must have $10000 in cash handed to him by 4:00am. The FBI was not prepared for an audition and Diana is unsure what to do. Peter, Jones, Neal and another agent are in the van and turn to each other to discuss what to do, when Peter realises that Neal has already left the van.

Neal steps up to Diana and offers to buy her a drink. She's not sure he can afford her, knowing full well that the FBI can't acquire cash that quickly. Neal whispers into her microphone that if Peter needs the cash, then he should go to Neal's apartment to meet their "mutual friend".

Mozzie takes Peter on an elaborate escapade to get the money. During this, a security guard recognizes him, calling him "Mr. C" and asking about "Mr. F ". Mozzie is astounded and disappointed to hear that the possibly corrupt politician Peter and Neal are working to take down is Jennings. Meanwhile, Neal and Diana are killing time in the penthouse suite. Diana tells of how she grew up the daugher of a diplomat, hence her great self defense skills. Her bodyguard, Charlie, died protecting her. She compares his death to Kate's. Neal says that it should have been him, but she disagrees, Meanwhile, she shows him some hotel secrets she has learned from growing up a diplomat's daughter. Peter returns to the van with the cash, hands it to Jones to serialise and then gets it up to the penthouse suite. The deal is sealed.

The next day, Neal has to save the campaign again, earning his money as a fixer. He comes up with an amazing advertising plan, using a fictional character names Timmy Nolan, a game of stickball, and a park. Reggie thinks Burke is buried for now, but could surface again as his career climbs the political ladder. He thinks the "girl" (Diana) knows more than she's letting on and has arranged for Barrow to get the information out of her. Neal sends an SOS message to Diana but Diana is already meeting with Barrow who has a gun laying across his lap. Diana tells him he is threatening a Federal Agent, this only seems to provoke him into wanting to rough her up even more. She tells him, if he draws the gun she'll put a bullet through his shoulder. Underestimating Diana, Barrow draws but he's too slow and falls on the floor in pain from the bullet in his shoulder. Peter and his back up team burst into the room to find that Diana has the situation well under control. They now have enough to close in on Jennings.

Peter arrests Jennings and his men take him into custody. Jennings is surprised to see that Neal was a part of the scheme. Neal discovers he inadvertently got a park built. Later at the office, Diana gives Neal a photo of Peter with a moustache which is Diana's payback for having to flirt with Neal. The office enjoys the photo, laughing hysterically while Diana informs Peter that nothing has come up on the mystery man. They have more work to do before getting to the bottom of this one.

Diana: "We're giving you a 4.0 from Harvard Law."
Neal: "Harvard is so pedestrian."
Diana: "Don't let Jones hear you say that."

Peter calls out of his office to Diana: "Diana, can you come here a minute?"
(To Neal, quietly) "Are you going to tell her?"
Neal: "I'm not going to tell her."
Peter: "You're the one that made her a hooker."
Neal: "You're the one that's sleeping with her."
Peter: "You got a point?"
Diana arrives at the office door: "Yeah?"
Peter: "Neal told Jennings you're a hooker. You and I are having an affair. You're going to go meet with an escort service."
Diana: "Okay. Anything else?"
Peter: "No." Diana walks away and Peter exhales with relief.
Neal: "It's good to have her back."

Peter: "Can you get us the ten grand or not?"
Mozzie: "Yes, but first some ground rules. I want full immunity about anything you may see or hear tonight."
Peter: "Let's just say, I'll owe you one."
Mozzie considers this for a moment: "I accept your counter offer. I need your shoelace."
Peter: "My shoelaces are going to get us the ten thousand dollars?"
Mozzie: "Rule number two, no further questions."

Mozzie to Peter: "That'll do pig, that'll do."
(An allusion to the Australian movie Babe)