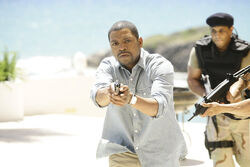 Most Wanted is the 2nd episode of Season 4 of the series and the 48th produced episode.

Having found Neal and Mozzie, Peter must help devise a plan to return Neal to the U.S. and avoid being captured by a ruthless bounty hunter.

The last episode ended with Kyle Collins holding Neal prisoner on the estate of Henry Dobbs, Cape Verde's richest man. When Neal breaks free from his restraints and attempts an escape, Collins shoots him in the leg. Meanwhile, Mozzie and Peter are clandestinely plotting to help Neal escape from the manhunter Collins. Peter and Mozzie discover which road Collins is taking to the airport and set a trap. When Collins arrives, a local fruit stand boy named Hector spills all of his fruit, blocking the road. As soon as Collins gets out of his car to help pick up all of the fruit, Peter frees Neal from his restraints. Neal informs Peter that he was shot and the two make a slow, yet successful retreat to Peter's car where the two drive off. Once Peter and Neal reunite with Mozzie, the three begin to concoct a plan to escape the island. While doing their research for said escape plan, they discover that Henry Dobbs is actually one of the FBI's most wanted criminals, Robert McCliche. Peter informs the FBI of Dobb's whereabouts, attempting to cut a deal for Neal's release once back on United States soil, but the FBI cannot recognize McCliche due to his reconstructive surgery. However, this revelation allows them to develop a con that would allow Collins to inadvertently capture Dobbs and bring him back to New York. To complete this con, Peter must take the role of a bartender, so Neal asks a local woman, Maya, the love interest in this episode for drinks to practice with. Neal tells Maya of their plan and the two kiss. The con begins with Peter starting a rumor about Dobbs ripping off his clients while serving drinks. Meanwhile, Neal and Mozzie sneak through the window and into Dobbs' office. Neal cracks open the safe in which Dobbs stores his clients money, and using an intricate set of mirrors and a painting, they create the illusion of an empty safe. However, one of the mirrors crack, forcing Neal and Mozzie to improvise. Neal remembers seeing a storage closet and the two take boxes and cases to make it appear as if Dobbs is leaving the island. However, during the con, Collins is at Maya's restaurant trying to persuade her to reveal Neal's location. He gets to her with the promise of five hundred thousand dollars and the chance to end the relationship before Neal. She gives Collins his location, and Collins arrives at Dobbs' mansion to arrest Neal. As Neal is being escorted to Collin's car, Maya is waiting outside. The two exchange bitter and sarcastic words, with Neal ending the exhange with "I hope you get everything you deserve." Once seated in the vehicle, Neal smiles in the mirror at Maya, indicating the two had planned this out. Collins drives Neal to the airport, where Peter is waiting. He tells Collins that FBI's Most Wanted, Robert McCliche is on the plane, and negotiates for Neal's release. Once back in New York, Peter is reassigned from the White Collar Task Force.

Retrieved from "https://whitecollar.fandom.com/wiki/Most_Wanted?oldid=15809"
Community content is available under CC-BY-SA unless otherwise noted.