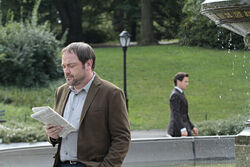 Previous Episode
No Good Deed
Next Episode
Shot Through the Heart

Live Feed is the 10th episode of Season 5 of the series and the 72nd produced episode.

A life hangs in the balance after Hagen tasks Neal with his final assignment.

Retrieved from "https://whitecollar.fandom.com/wiki/Live_Feed?oldid=15931"
Community content is available under CC-BY-SA unless otherwise noted.