Kate Moreau was an ex-girlfriend of Neal Caffrey

Neal is Kate's boyfriend. He escapes from jail to look for her once she stops visiting him. Halfway through Season 1, Neal and Mozzie deduce that the one holding her captive is part of the FBI. Neal tracks the ring to Peter, but it is revealed that the ring is given to everyone who has served in the Bureau for 10 years. Neal and Peter suspect OPR Agent Fowler to be the perpetrator of Kate's disappearance, and Neal confronts him, exposing Operation Mentor. Their suspicions turn out to be right when Agent Diana Barrigan poses as an IT employee and steals encrypted files from Fowler's computer. Peter arrives and confronts Fowler, and it ends with two bullets shot at Fowler's vest. Fowler then reveals that he struck a deal with Caffrey, offering him and Kate full immunity and a chance to rebuild their lives. Worried, Peter rushes to the Hangar location that Fowler provides him with, and finds Neal about to get on a plane with Kate. They share an emotional conversation, and as Neal turns to Burke one last time, the plane explodes in a fiery inferno, leaving Kate dead and Neal distraught.

Kate's relationship with Mozzie is relatively unknown but from suggested that she was romantically linked with Neal, we can assume she was good friends with Mozzie as well seeing as she helped both Neal and Mozzie on several capers as the one seen in Season 2, Episode 11. Mozzie is constantly reminded "by" Neal on how much Kate means to him and yet there are several times through the first two seasons, Mozzie questions Kate's loyalty to Neal as seen in Season 1 Episode 2 when Mozzie questions Neal about where he hid all of his treasures. Neal told Kate it was San Diego, while he told Mozzie it was in Portland. It was ultimately a test to see who would overturn him first.

Peter is often frustrated with Neal when it comes to his obsessing over Kate. She is the sole reason that Neal escaped out of a maximum security prison causing his sentence left to go from four months to four more year sentence. Throughout the entire first season and beginning of the second season, Peter constantly has to deal with Neal moping over Kate, her whereabouts and the one thing that could bring her back to him, the Queen's Amber Music Box. Peter contacts Kate secretly in order to pass messages or codes to Neal. He believes that Kate is merely using him and that she could possibly be working for Fowler, the man who has control over her.

Robert is Kate's deceased father. She left a paper flower at his grave for Neal. 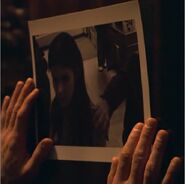