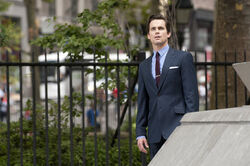 Judgement Day is the 16th episode of Season 3 of the series and the 46th produced episode.

When Agent Kramer returns to derail Neal's commutation, Neal races to right a wrong from his past.

Neal attends his commutation hearing, where he is told the board will interview witnesses over the next 2 days, and hear his final statement and Agent Burke's statement before deciding on the commutation of his sentence.

Neal and Mozzie find out that Agent Kramer is going to testify at his hearing.

Neal asks Agent Burke whether he has decided what to testify at his hearing, he says he hasn't.

Burke meets Diana who tells him that Kramer is having the team dig into Neal's letters to Kate, and that he speaks about Caffrey in glowing terms whenever he speaks.

Agent Burke meets Kramer who tells him that to protect Burke from Caffrey he wants Caffrey to work with him in DC.

June testifies at the hearing and tells the board Neal deserves to have his sentence commuted.

Burke is worried that Kramer will find something in Neal's past that will send Neal back to prison for a long time.

Burke meets Kramer while Neal eavesdrops on them. Kramer confesses that he wants Neal to get a long prison sentence so that Neal can work for him permanently in D.C.

Neal finds out a subpoena in Kramer's office for Sterling Bosch files related to the Raphael he stole. Kramer has figured out part of the address where Neal had hidden the Raphael. Burke tells Kramer that Neal should not go free till the end of his sentence.

Neal meets Sara to get rid of the other part of the address where the Raphael is hidden, so that Kramer can't find it, but Sara can't access the electronic record of the file. Sara lies to Kramer that the Raphael has been recovered that morning and is currently with an authenticator. Kramer says he will take custody of the painting from Sterling Bosch at 6 pm, and if Sara is unable to hand it over he will charge her with obstruction of justice.

Sara testifies in front of the commutation board and tells them that Neal has changed.

Neal is going to Roosevelt Island by a tram to recover the painting. He calls Peter and asks him to extend his 2 mile radius which he does. Neal calls Mozzie and requests him to arrange for transportation to move the painting.

Neal meets a woman called Ellen in a high-rise building. She says that the last time she saw Neal was 15 years ago on his 18th birthday.

Burke asks Jones to track Neal's location and he heads over to Roosevelt Island. Jones says that the woman in apartment 14-E is E. Parker, who is in the Witness Security program.

Ellen hands over the painting to Neal. He meets Burke outside the building and they head back to Manhattan on the tram. Diana calls Burke and tells him that Kramer is waiting on the tram station on Manhattan side.

Elizabeth testifies in front of the commutation board and says that Neal's sentence should be commuted.

Neal hops over onto a tram moving towards Roosevelt Island. Mozzie calls him and has arranged transportation, a stolen ambulance.

Kramer tells Burke that he will be waiting for Caffrey at Sterling Bosch.

Mozzie and Neal escape in the ambulance. Mozzie tells Neal that he has hidden Neal's part of the treasure outside the country, and they can escape whenever they want and live comfortably for the rest of their lives. Neal tells him that he doesn't want to run anymore.

Jones testifies and tells the board that Neal is good with people, and at his job. He should serve his remaining 2 years and be grateful as it's the "best damn deal he has ever seen".

Burke calls Sara and asks her to arrange a meeting with her boss in 5 minutes.

Neal is seen by Kramer's agents outside the Sterling Bosch office and is chased by them. Diana gets him to get in her car and saves him.

In the meeting with Sara's boss Mr. Bosch, Burke and Sara put forward a proposal "which seems irregular", but not illegal, and will earn Sterling Bosch $15 million in 5 minutes. Bosch agrees to this proposal.

Caffrey gives his final statement before the commutation board and says he hopes his actions will speak louder than his words.

Neal tells Burke that it doesn't matter what he says in front of the board as with or without anklet he will step out of the elevator on the 21st floor in the FBI building to work on Monday morning.

Burke asks Neal how he switched the Degas painting. Neal tells him the truth about how he snuck into the penthouse, swapped the paintings and base jumped onto Wall Street. Burke thinks he is joking.

Kramer tells Burke that when Neal comes back to the hearing he is going to arrest him for public endangerment for hopping the tram, obstruction of justice, jaywalking, etc. and that Neal will get a long sentence and work permanently with him in D.C. Neal sees them both from a distance and Burke signals to Neal by shaking his head.

Burke testifies in front of the board and says that we will never know whether Neal has reformed as long as he is wearing the anklet. He says that he is in favor of Neal's sentence getting commuted. Diana interrupts the testimony to reveal that Neal has cut off his anklet and run away.

The season ends with a shot of Neal and Mozzie on a plane.