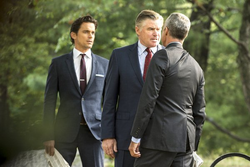 In the Wind is the 16th episode of Season 4 of the series and the 62nd produced episode.

In this season finale, Neal and Peter are one heist away from retrieving the evidence box hidden inside the Empire State Building. Meanwhile, Senator Pratt enlisted a small army of FBI agents to find the box before Neal.