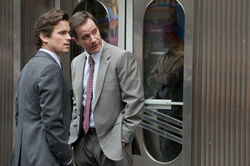 In the Red is the 6th episode of Season 2 of the series and the 20th produced episode.

Neal is talking to a woman in a car, but it is unknown why. The FBI are watching from a van, listening to Neal over an earpiece.

Neal trades his briefcase for jewels, asking if she's sure. He seems reluctant to make the trade, and Peter wonders why. Neal asks again if she's sure, and she says yes and to hurry up.

Peter and the FBI finally move in, and Neal holds up a child's toy truck, saying "no guns". The FBI are shocked to see a young boy sleeping in a car seat in the backseat.

The woman is crying in the FBI office. They ask her why she stole the jewels from her work and why she brought her son. He was adopted from Chechnya only a little while earlier.

However, the mother got a demand for more money, otherwise the birth mother would take him back.

Peter and Neal begin to suspect that there is more to this than meets the eye.

At the same time, Sara Ellis comes into the FBI office, highly suspecting Neal for stealing the cockpit recording out of her house. In reality, Neal never did, it was Mozzie. She brings a polygraph and demands that Neal take the test. Neal steals a thumbtack off of Peter's desk and cheats the test by applying pressure.

Peter goes and speaks to their suspect, Donovan, who was the person the lady adopted her son from. Donovan is in need of money to pay back a mob leader in a game of poker. Peter is unable to call him out for anything because all the paperwork looks legit.

Neal decides to pay a visit to the poker master. He plants Peter's phone in someone's pocket so Peter can hear what Neal is up to. Under the name "Nick Halden" , Neal scores a game of poker against Donovan. In the meantime, Jones and Diana pose as a married couple wishing to adopt a daughter from Donovan. He demands $50K from them by the next day as a fail safe incase he doesn't get the money he needs from his poker game. Neal ends up cheating and winning the poker game, winning 900K for the FBI. Donovan is desperate at this point.

Donovan calls the adoption agent who is actually under the control of the FBI. They say that the adoption will be delayed because of a paperwork switch up. Donovan then calls Diana and Jones saying that the birthmother wants her daughter back and will give her up in exchange for $200K. The FBI know he's a scam, now. Donovan wants the money by the morning the next day so that he can take it and leave the country, without having to pay it back.

The FBI make a deal with the mob leader and his people after they reveal that Donovan's scam involves Chechen kids. The act as though they are torturing Neal because he is withholding money from them, and when Donovan refuses to pay up, they threaten to do the same to him. He then reveals that he is part of an adoption scam and he will cut them a part of his pay. The FBI close in on him and arrest him.

Sara comes to Neal's house with the cockpit recording, saying that she's in. She wants Neal to listen to it. He does with Mozzie, and it is revealed that Kate made a phone call to an unknown person about Peter Burke.