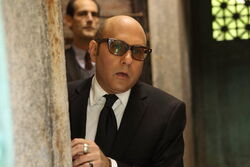 Identity Crisis is the 6th episode of Season 4 of the series and the 52nd produced episode.

Mozzie buys a storage unit that leads him, Neal, and Peter on a dangerous treasure hunt, following clues left by what Mozzie believes to be the modern day remnants of a revolutionary spy ring.