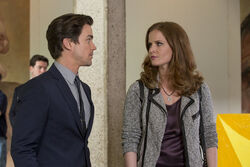 Honor Among Thieves is the 5th episode of Season 4 of the series and the 51st produced episode.

{{:Episode Descriptions (Season 4)/4x05}When Ellen is murdered, Neal leaves himself open to being blackmailed by the art thief they're after in exchange for information, which may lead to a breach of trust between him and Peter.