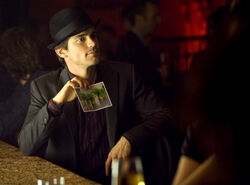 Home Invasion is the 11th episode of Season 1 of White Collar and the 11th produced episode.

When a man the FBI is watching turns up dead, the main suspect does not stick around to answer questions. Neal must use all his wiles so he can help find her and return a priceless jade collection to its rightful owners.

Neal watches a woman eyeing a man and swaps out the man's wallet for another wallet with a yellow origami flower. The woman then pick's the man's pocket, taking the wallet Neal had left. When she finds the flower, she immediately searches for Neal, and they reunite. Neal informs her that she telegraphs her marks, and she expresses her dismay that despite spending four years in prison, he's 'still the best' and a 'show off.' Neal introduces her as 'Alex,' asking if she's missed him. Alex claims to have never thought about it, and tells Neal that he has something that belongs to her. Neal reminds her that the wallet truly belongs to 'Joe Nelson,' and they exchange wallets. Alex then asks what Neal wants. Neal tells her he needs her expertise and shows her a picture of the music box. Alex rhetorically asks if he's finally admitting to never having the box, and Neal tells her that she 'got closer than anyone else.' Alex replies, 'We got closer, but it didn't work out,' indicating that they had teamed up to steal it, but failed. Neal suggests that they try again, but Alex rebuffs him, claiming that she gave up on the music box 'a long time ago.' However, Neal disproves her claim by producing a golden piece of the music box taken from Alex's purse. Alex claims that she was nostalgic and couldn't bring herself to part with it. She tells Neal that she has no more information about the music box, and Neal offers the origami flower to her, telling her that his number is inside, 'in case,' and bids her goodbye.

Peter enters the stakeout van, announcing shift-change to relieve Jones and Lauren. They report that Mr. Grey, a suspected insider trader, has entered the residence with someone who Peter says 'doesn't look like Mrs. Grey.' A gun shot suddenly echoes through the street. Peter tells Lauren to call for backup and rushes into Mr. Grey's house with Jones. They find Mr. Grey's young companion huddled behind the sofa. She says that a man had been waiting for them, killed Mr. Grey, then escaped through a side door. Peter orders everyone to 'round up the staff,' tells Lauren to get the girl, Pierce, to the hospital, and asks Jones to find Neal.

Neal arrives at the crime scene and immediately recoils at the sight of the dead body, claiming that murder isn't an intellectual pursuit and is therefore not his area of expertise. Peter lures him into the case by telling Neal the dead guy's name, Aldis Christopher Grey. Neal recognizes him as a stock trader who 'made a killing in derivatives right before the crash' and apparently has 'quite the art collection.' Neal then decides that the case does fall under his area of expertise and begins looking around. Peter begins telling him what happened before Grey was killed, and Neal discovers that Grey's female companion's ID is a fake. Peter sees Grey's shoes, which match the imprint found near the supposed killer's escape route, and he concludes that the girl is the real killer. Jones then reports that the girl has escaped from the hospital.

That evening, Alex appears in Neal's apartment and calls him out for turning Fed. Alex asks him if he really thought he could keep that information from her, and Neal admits to hoping that she wouldn't find out about it. Alex asks if he's trying to set her up, and Neal tells her that he's pursuing something they both want to have. He then asks what she's found out about the music box.

Alex asks why he's suddenly after the music box once more, and Neal claims that he 'couldn't look for it in prison,' but now that he was out, he was free to do it again. He also claims that he was starting to miss her. Alex dismisses the latter comment, but tells Neal that she tracked down the fence who gave her the piece of the music box she had. The fence claims that there has been active chatter about the music box, and Neal tells her that they have to get the box first before anyone else. Alex suspects that there is more to it than his desire to find the box, but they are interrupted by Peter Burke, who has decided to take up Neal on his offer to share his apartment while his house's wiring system was being upgraded. Neal convinces Alex that Peter can't know she's there about the music box, and they pretend to have been in the middle of a romantic evening. Peter tries to excuse himself, but when he introduces himself as an FBI agent, Alex tells Neal that they're done, spells F-E-D on the Scrabble tiles Neal had out, and leaves.

Later, Alex walks into the middle of an FBI operation and blows Neal's cover as payback for the FBI running her prints. Later that night Pierce shows up at Neal's apartment and threatens him to take her to the remaining two jade elephants. Neal has to take off his anklet but he sends a message to Peter and the FBI are able to catch Pierce.

At the end, Neal tries to slip a white origami flower into her bag, but Alex catches him and claims that the flowers have lost their charm. Neal apologizes for lying to her, and Alex tells him that she knows better than to trust him. Neal expresses the same sentiment, but claims he's 'willing to take a leap of faith.' Alex then tells him that she knows where the music box is. Neal asks her to tell him, but Alex says that so long as Neal works for the FBI, he will never know.

Daniel: (to Neal) You are the Ambassador of Awesome.

Retrieved from "https://whitecollar.fandom.com/wiki/Home_Invasion?oldid=15712"
Community content is available under CC-BY-SA unless otherwise noted.