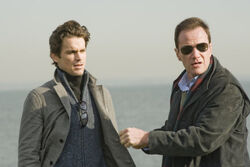 Hard Sell is the 8th episode of Season 1 of White Collar and the 8th produced episode.

Neal poses as a broker selling shares in to a phony company over the phone. While discussing progress on the case at Peter’s house, Neal asks to use the bathroom. On the staircase, Neal examines photos of Peter and Elizabeth on the stairwell and sees the “smoking gun” – a gold pinkie ring.

Peter goes undercover as the CEO of the phony company, Rymer Pharmaceuticals. At a party hosted by Avery at his home, Peter is taken by Avery into his comic book collection room. Avery explains that if a fire starts in the room, the door closes and vents suck all the oxygen out, suffocating the fire. He then turns to Peter and makes a threat. If Peter crosses him, the same will happen. Outside over some clay disc shooting, Neal and Peter see Madison being brought to the house by some heavies. The two realize she has been discovered as the mole. Neal chooses that moment to confront Peter about the ring. To protect Madison, Peter outs Neal as a mole, directing Avery’s men to search Neal and find the wire. Neal says he’s working for Reed (Avery's Partner) and manages to negotiate flipping his services.

Neal talks to Elizabeth about Peter possibly having Kate. She defends her husband through and through. Peter then comes from upstairs with the incriminating ring, showing Neal it is a “10 Years of Service” ring given to all FBI agents after serving that amount of time.

The case develops further and the FBI needs to find Avery’s ledger which is not on a computer, but on paper. The stock for Rymer Pharmaceuticals is going to be dumped and Avery hosts a party at his home to celebrate. Neal needs to get into the comic book room to get Avery’s paperwork. Reed busts into the party and confronts Avery. The two quickly figure out Neal is not working for either of them and is after the ledger. Everyone runs to the room and Avery activates the fire suppression system with both Neal and Peter in the room. Neal insists Peter use the limited oxygen supply while trying to find the kill switch, Avery stands outside waiting for them to either die or shoot them if the kill switch is hit and the door releases. They find the kill switch, Neal passes out from lack of oxygen, Peter hits the switch, the door raises just as the FBI support team arrives. The bad guys are busted.

After the case, Peter tells Neal about his meeting with Kate (cliffhanger from the previous episode – Free Fall). Peter convinces her to stop stringing Neal along in exchange for a “music box". It seems Kate is not being manipulated at all, but running her own game with Fowler involved. Neal still thinks Kate loves him, but Peter explains how cold she was regarding Neal’s welfare. Neal and Peter discuss the music box which they suspect may be more than meets the eye. Peter wants to see it; Neal says he will need some time.

Back at Neal’s house, Mozzie visits and Neal confesses despite popular belief, he doesn’t actually have the music box. Now they have to find it.

Avery (to Peter): "Before we do business off the books, we should discuss it off the clock."

Mozzie: "Okay. So. Fowler wants the music box, let's give it to him."
Neal: "I don't have it."
Mozzie: "What? You told everyone you had it."
Neal: I never told anyone. Everyone assumed I took it and I never corrected them."
Mozzie: "It did make you appear ... superhuman."
Neal: "Image is everything."