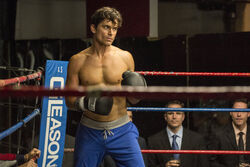 Gloves Off is the 9th episode of Season 4 of the series and the 55th produced episode.

Peter sends Neal undercover as a Wall Street stock trader. Neal discovers a White Collar boxing ring where traders fight for insider information. In order to take down the corrupt CEO, Peter and Neal must step out of the office and step in to the ring.

A unexpected revelation occurs when Peter assigns Neal to an undercover mission as a stock trader on Wall Street. Neal learns that the traders are operating an underground "White Collar boxing ring", where they fight each other for insider information. Unfortunately, Peter and Neal must step into the ring themselves if they are going to want to bring down the corrupt CEO and leader of the ring. Later, Peter makes a big mistake during his investigation of Sam that sends Sam into hiding.