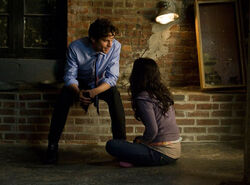 June announces to Neal he has a guest It’s Alexandra Hunter. They have a discussion about the music box. Neal convinces Alex she needs him to help her get the music box. She replies that as long as he works for the Feds, she will not have anything to do with him. She says she will be willing to help, if he can get his anklet off.

Agent Kimberley Rice, a rising star in the FBI and part of the Kidnapping and Missing Persons division, is in Reese Hughes' office. She catches Neal’s attention and it becomes clear they are discussing him. Neal thinks he’s in trouble but it turns out she wants his assistance on a ransom case she is working. Neal has a history with the prime suspect, Ryan Wilkes. When asked about the last time Wilkes and Caffery saw each other, Caffrey says that would have been when Wilkes tried to kill him.

Agent Rice takes Caffrey to the Gless residence. Caffrey also has a history with Gless in breaking his “unbreakable bond” and ruining Gless’ reputation. There is some tension between Caffrey and Gless as the meet in his home study. Rice asks Gless to describe the events he is aware of and Caffrey starts to ask questions Rice does not approve of. Rice reprimands Caffrey and describes him as a “tool” in her “belt” and says he is not to make a move or say a thing without her okay first. Neal’s charms fail to convince her otherwise.

Back at home, Elizabeth Burke is having breakfast with her husband talking about an event she organsied at a gallery. Peter is distracted and not listening properly, when Elizabeth makes fun of him and breaks into his thoughts. He’s worried about Neal because he doesn’t trust Agent Rice. When Elizabeth suggests he go check on Neal, Peter says it’s bad form to drop in on another agent’s investigation. Elizabeth points out; this has never stopped him before….

Peter knocks on the car window where Neal is sitting, having been sent there by Rice. Neal decides to stretch his legs while talking to Peter and they start discussing possible methods Wilkes may have used to break into the house and kidnap Gless’ daughter, Lindsay. They come across an alley giving a good view of the street. There is a coat-check stub on the stairs Neal advises would be from a club or underground casino, one of Wilkes’ choice hangouts. When Rice exits the residence to find Burke and Caffrey talking together, she is clearly annoyed Burke is on her scene, a situation inflamed by the evidence Burke presents. She threatens if she finds him snooping about one of her scenes again she’ll file a report. Burke scoffs and mocks her, much to Caffrey’s amusement.

Rice has arranged for Caffrey to enter this underground casino and Neal prepares for his indercover operation. Mozzie thinks he’s lost his marbles by allowing the “Pant Suit” (Rice) to use him as bait to bring out Wilkes, especially seeing as Wilkes wants Caffrey’s hide. Neal feels the risk is worth it as he will be able to remove the anklet during the operation and may get a chance to speak with Alex about the music box.

Rice does indeed advise Caffrey to remove his anklet. This alerts Peter back in the Bureau office who is surprised to learn Rice had this cleared. Peter is suspicious and decides to have a little chat with Gless where Gless explains his nervousness surrounding the “meeting”. Gless reveals this meeting with Caffrey is the ransom demand. Peter calls Neal’s cell phone and warns Neal to get out of there; he is the ransom. However he is too late and Neal is hit by a taser and kidnapped.

Rice returns to the office with little evidence as to where Caffrey might be. Burke calls her out in front of everyone claiming she had a backroom deal with Wilkes. Rice has to confess that was essentially the plan, however she had agents covering every angle of the place keeping an eye on Caffrey. Reece Hughes interrupts their arguing to ask Rice how she lost Caffrey, her replay is Caffrey was in the only blind spot of the operation. Hughes is not happy and puts Burke in charge of the case. Rice is furious but can do nothing about it.

Neal comes to in the back of a van with Wilkes looking straight at him. Wilkes recalls his version of events when working with Caffrey whereby Caffrey ripped him off for $500,000 and says, normally, he kills people for that sort of thing. However he needs Caffrey alive to do some work for him.

The van pulls up outside a travel agency, inside is a receptionist from who Caffrey must obtain the personal itinerary of a "Thomas Loze" in a two minute time frame. Wilkes has him covered with a sniper on the roof in case of him pulling any tricks or of failure. Caffrey uses his alias "Nick Holden" when speaking with the receptionist and claims he is with concierge services and needs to make a week’s worth of 5 Star restaurant bookings for Thomas Lowes, but he’s lost his schedule and he needs a copy otherwise he’ll be fired. When she doesn’t fall for his initial charm, he then plays to her motherly side by talking about how his son will see him as such a failure for losing another job. This softens the icy receptionist and she brings up the itinerary. Caffrey also tells her he has somebody who might be interested in the rewards program offered by the agency.

Retrieved from "https://whitecollar.fandom.com/wiki/Front_Man?oldid=6420"
Community content is available under CC-BY-SA unless otherwise noted.