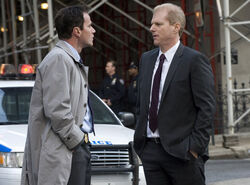 Previous Episode
All In
Next Episode
Hard Sell

Free Fall is the 7th episode of Season 1 of White Collar and the 7th produced episode.

As Neal becomes a suspect in a jewelry heist, Peter must determine if Neal's lying. Meanwhile Neal closes in on the man with the ring and discovers he is closer than he had ever thought.

Neal and Peter race back to headquarters to pull suspects, but they get an unwelcome surprise in the form of Garrett Fowler from the Office of Professional Responsibility. The FBI's version of Internal Affairs, the OPR says they're in town to conduct a standard review. In reality, Fowler is looking into the same diamond heist and he has already found his prime suspect -Neal.

Peter is immediately dismissive, but Fowler makes a compelling case. Neal was one of a handful of people with the inside information to pull off the job, and even more incriminatingly, his tracking anklet went dark for six hours on the night of the heist.

It's a lot for Peter to think about while he and Neal interrogate their own suspect, Adrian Tulane, a legendary forger and thief. Tulane has the pedigree, but his alibi checks out. There's no easy way for Peter to say it, Neal is now the main suspect in the case. When analysis of the forged pink diamond turns up Neal's micro-printed signature, Fowler places Neal under arrest.

Peter is crestfallen. How could Neal do this to him? Neal protests - he was set up! But Peter doesn't want to hear it. The evidence is just too overwhelming for him to see it any differently.

However, Neal has been doing some investigating of his own, and he has a feeling that whoever set him up for the diamond heist is also involved with Kate's disappearance. With Mozzie acting as his lawyer, Neal puts a plan in motion from prison. He's going to get to the bottom of this, with or without Peter's help...

Neal then asks Mozzie to melt some assets in order to buy a bakery, and then tells the judge he is ready to confess, but wants a private conference in the judge's quarters because he has dangerous accusations and evidence to put forth. On the day of the confession, the air con is broken in the judge's quarters (Mozzie) and the judge opens the window. Neal states that he is not guilty, and when the judge asks him why the hell he wanted a private conference for this, he promptly jumps out of the window and free falls down into a canopy outside a bakery.

Mozzie:(Referring to FBI) You lay down with dogs, you get up with fleas.

Neal: Please, I could live without the fortune cookie commentary.

Neal: I confess that I've done a lot of things in my life that I'm not proud of. No. (pause) No, that's not true. I'm proud of most of them.