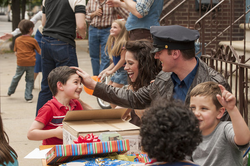 Family Business is the 11th episode of Season 4 of the series and the 57th produced episode.

Peter and Neal attempt to find the truth behind Neal's father's crime. In doing so, Neal must go undercover into the world of counterfeit whiskey to take down a high level member of the Irish Mob.