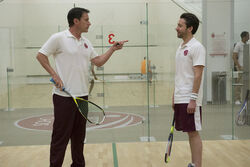 Diminishing Returns is the 3rd episode of Season 4 of the series and the 49th produced episode.

With Neal Caffrey and his team's help, Peter Burke surreptitiously investigates a brilliant thief who has avoided the FBI's capture for years.

After the debacle of the previous two episodes, Peter is assigned to the evidence room. Fortunately, the new gig allows him and Neal to find new evidence and begin a case against a criminal mastermind named David Cook, who Peter has been trying to catch ever since he joined the FBI.

Mozzie comes back to New York.

Neal tells Burke that he, his mother and Ellen grew up in Witness Protection. His dad confessed to a murder. When he grew up Ellen told him that his real name was Neal, and his mother's maiden name was Caffrey; that's how Neal Caffrey was born.

Neal meets Ellen and questions her about his father. She tells him that his father James arranged for a meeting with fellow officer, and by the time Ellen got to the meeting the officer was dead; a gun was found with James' prints on it. Ellen says she investigated the case and was onto something big, but James confessed to the murder before she could conclude the case.

It appears to me that the "picnic area" scene might have been filmed at or near the Bayside Fuel Oil Storage Depot in Brooklyn, N. Y. The general location (using Google Maps) is "Bushwick Inlet". The street location is the intersection of Kent Avenue and 12th St., Brooklyn NY. The satellite view reveals the big oil storage tanks which are the background to the picnic table scene.