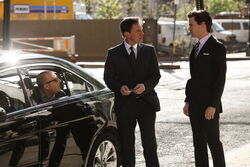 Dentist of Detroit is the 4th episode of Season 3 of the series and the 34th produced episode.

When a mobster from Mozzie's childhood in Detroit surfaces in Manhattan, Neal and Peter must help their friend rework a scam from his past to take down the ruthless gangster and prevent a mob war.