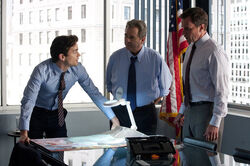 Previous Episode
On the Fence
Next Episode
Checkmate

Countdown is the 10th episode of Season 3 of the series and the 40th produced episode.

Neal and Mozzie must stay one step ahead of the FBI while appearing to work with them in order to keep them from discovering that they possess the treasure.

Mozzie has sold a piece of the treasure behind Neal's back. With the money he put a bounty on Keller. Now the F.B.I knows about the painting. Mozzie had no idea that the piece was on the list because Neal did not tell him. Now Neal and Mozzie must plan an elaborate heist to replace the real painting with a fake Neal has made.