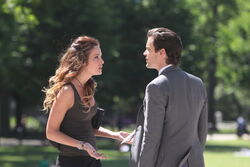 Previous Episode
Need to Know
Next Episode
By the Book

Copycat Caffrey is the 3rd episode of Season 2 of the series and the 17th produced episode.

Neal goes back to school in order to trap a college professor and his students who are turning themselves into a ring of thieves. Alex returns and needs Neal's help after getting into trouble over the music box incident at the Italian Embassy. He then realizes that he is being tricked....

"Or I'll start with your fingers." - Peter Burke, Mozzie