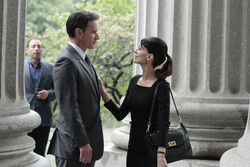 Compromising Positions is the 7th episode of Season 4 of the series and the 53rd produced episode.

When a criminal Peter Burke arrested hires a high-powered political fixer to sabotage the trial, Peter Burke, and Neal Caffrey must take on this brilliant but devious opponent who maintains a lawful facade.

Neal and Peter pursue the conviction of a corrupt developer, enlisting the help of Mozzie and Sara. Getting in the way of their target is a sharp woman who works as a fixer for several clients, including Sara's company. Meanwhile, Neal meets with Sam, a friend of the late Ellen's who tells Neal about a conspiracy that involves several higher-ups in law enforcement.

"45 years ago, an enigma gave a paradox a very special hug."
―Mozzie