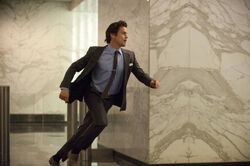 Company Man is the 8th episode of Season 2 of the series and the 22nd produced episode.

Neal and Peter go undercover to solve a case of corporate espionage.

The Auditor's office used by Peter appears to be in the Citigroup building, 601 Lexington Avenue - recognisable by the distinctive chevron girders in the interior. As he looks out the window, the salmon pink building is 900 3rd Avenue (36 storeys), the shorter building with the tall windows on the top floor is 909 3rd Avenue (33 storeys); putting the office on the north east corner, on 54th Street, round about the 34th floor.

The office Peter uses in this episode appears to be the same (if not similar) offices used in Suits.