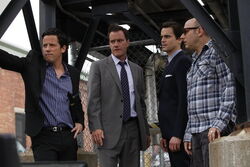 Checkmate is the 11th episode of Season 3 of the series and the 41st produced episode.

Neal is forced to come clean with Peter about the hidden cache in order to save Elizabeth.

Elizabeth has been taken by Keller, who is demanding the treasure. Peter finds out that Neal has it but by the time they get to the storage unit Mozzie has taken everything. No knownaliasis of Mozzie have shown up, Peter and Neal deduce that he is still here. Mozzie helps Peter and Neal to try and take down Keller. Grant, the person keeping an eye on Elizabeth, has been bitten by Satchmo. El convinces Grant that his bite is infected. While he is gone she uses her wedding ring to carve an X on the fire escape window. She repeatedly bangs the window with a chair until it is broken. Meanwhile, the plan to transport the treasure falls apart when Keller knocks out Neal. He wakes up and finds himself inside the back of the cargo truck. After breaking out, Keller and him fight. Keller is about to deliver the death strike when Peter comes and fights Keller. Neal then finds a gun and shoots Keller in the leg. The next day, Neal walks into the office the next day and is ready to confess he stole the treasure, cut Keller delivered still visible, but cleaned up. Before he can Peter shows him a video of Keller confessing to the crime to the Russian government. Peter is pulled aside by Diana. She hands him a folder stating that Neal can be a free man in 3 months, due to his good work in the White Collar division and "helping" to find the treasure.