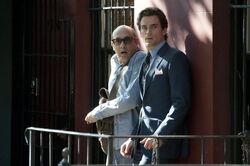 By the Book is the 4th episode of Season 2 of the series and the 18th produced episode.

Mozzie works with Neal and Peter in order to find his waitress crush, who disappears under mysterious circumstances.

Mozzie goes to his favorite diner and converses with his waitress crush, Gina. Two suspicious-looking men come in, and the waitress makes a nervous remark, following which she leaves with the men. Mozzie then goes to FBI headquarters, where he confides to Neal that he thinks his waitress crush has been kidnapped. Neal and Mozzie go to Gina's apartment, which they discover someone has gone through. They also find out Gina has a boyfriend. They discover a clue that leads them to a cigar bar by Mozzie's chess club. Meanwhile, Burke grows suspicious of Neal's actions when exiting the elevator and begins making inquiries about Gina also. Burke discovers that Neal and Mozzie are in danger. At the cigar bar, Neal eavesdrops on the party responsible for Gina's disappearance, but a text from Burke gives him away. Burke eventually manages to pull him from the situation, and Mozzie and Neal go to the FBI headquarters, where they get another clue about Gina, which leads them to a park, where Burke has an idea and confiscates the camcorders of people so he can use footage to look for Gina. The search is successful; Gina is seen being used as bait for her boyfriend by the two men from the diner. Gina's boyfriend eventually leaves her behind, but not before dropping his phone in a park trash can. Upon examining the phone, Neal and Burke discover a ransom call from the man responsible for Gina's kidnapping. Tommy, Gina's boyfriend, is nowhere to be found, which means Gina will be in mortal peril as there is no way to fulfill the ransom. Neal and Mozzie brainstorm and decide to work an angle through an old acquaintance named Devlin, who reveals a key piece to Tommy's location, a new identity turning Tommy into a man called Sam Brennan. Burke follows up on this piece of information. Burke brings Tommy into headquarters and puts a plan into place to rescue Gina. Mozzie walks into the situation in Tommy's place. Mozzie verifies that Gina is unharmed then starts making demands from Gina's kidnappers. Mozzie makes a plan for Tommy to exchange the money he stole for Gina. There's only one problem: the plan puts Mozzie's life in danger. Fortunately for Mozzie, Burke intervenes and makes sure Gina's kidnappers are successfully apprehended, and Gina is rescued. At a later point, Gina tells Mozzie she broke up with Tommy, and that she is moving to California. The episode ends with Mozzie, Neal, and Burke bickering while walking back to the Bureau.

"It's goodbye, but we lean forward to the next crazy venture beneath the skies" (Mozzie).