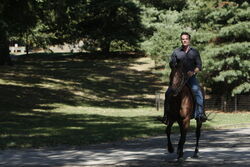 Burke's Seven is the tenth episode of Season 2 of the series and the 24th produced episode.

The episode follows Mozzie's recovery after being shot by a hit-man at the end of the last episode. He survives through surgery and is placed in a medically-induced coma. Neal agrees to play by FBI rules to see the hit-man, soon identified as Julian Larssen. Larssen is suspiciously easily arrested, but evidence points to Burke as the killer. That suffices for Peter's suspension from the FBI, leaving only Neal's ways.

After a recap of the cliff-hanging event of the last episode, we open with Mozzie being rushed to the hospital and narrowly avoiding death. He is placed into a medically-induced coma and Neal has a hard time leaving him alone. Peter convinces Neal he can do more for his friend outside the hospital and to follow the FBI's regulations to catch the shooter.

They suspect Julian Larssen to be behind the murder in the previous episode and Mozzie's shooting. In an effort to limit his movements and find him easily, they interview people from his life (lives) and burn all of his aliases. Neal gets the forger community together and requests that they help "for Mozzie". They agree if Larssen comes looking for a new ID to give him the alias Justin Springer.

Mozzie awakes suddenly in the hospital and Neal informs him that the bullet missed his heart by two millimeters. Mozzie replies that is because he has no heart. To his joy, he is not "in the system" and is instead checked into the hospital under a fake name, an anagram for Invisible Man. Neal tries to have Mozzie identify his shooter but Mozzie has no memory of him.

After Neal updates Peter on the phone, we see Larssen following him into an alley. Neal realizes this and the two come face-to-face. Larssen demands Neal help him get out of the city, and offers him the identity of "the man behind the curtain". When Neal still refuses, Larson tells him this person ordered Mozzie's shooting and killed Kate.

Neal tells Peter and Elizabeth about the conversation and says he wants to handle this through the justice system. The team finds that Larssen's new alias, Justin Springer, has been used to buy a flight ticket out of the country. Peter leads a team which bursts into the apartment where Larson is staying. They grab him and find a gun hidden in a fake plant.

Back at the hospital, Mozzie tells Neal the equation inside the music box "builds something". After he was shot, Larssen stole the code from him. Mozzie wants to build whatever it is before the bad guys. He admits he told Peter that Neal was going after Fowler and he feels like a traitor. Since Fowler didn't kill Kate, Neal says Mozzie did him a favor.

Peter questions Larson, who remains smug and refuses to say anything. Peter is pulled out by his boss and a member of the Justice Department. He is informed that ballistics were not able to match the gun to the shootings or find any prints on the outside of the gun. There is only one print, and it is inside on the gun's slide. The print matches to Peter. The only way the print could have gotten there is if Peter assembled the gun. Agent Rowe from DOJ places Peter on suspension. Hughes has no choice but to allow the action. Larson is allowed to leave, as there is no evidence against him. Peter must leave too, since he is not allowed inside the building.

Peter tells Neal that DOJ has pulled all of his files. They wonder how Larson could have gotten his prints, as the print on the gun was larger than the print in Peter's file. They realize Larssen stole a mug from Peter's desk.

Diana and Jones find video evidence from a few days earlier of a shadowy figure taking the mug from Peter's desk and using his computer. While the figure resembles Neal, this person has a different gait and is careful not to have his face seen on camera. They are convinced it's Larssen and see him leave with the coffee mug. They also realize he went on Peter's computer. Jones then asks Diana about the secrets she has with Peter. She replies that Peter needs to tell Jones himself what is going on.

Neal and Peter check out a country club that they gain access to with the help of Sarah, who was the insurance agent that testified against Neal at his trial and was recently "killed" to help with an investigation with the FBI. Peter and Neal do this without the FBI's permission or support. While there, Neal and Sara pose as rich owners from the country club and find out information from a yacht manifest. Peter makes a connection posing as a horse racing enthusiast. Neal has an idea based on a con he (allegedly) pulled in the past. However, they need help.

At the Burke's house, Diana and Peter explain to Jones about the music box. Meanwhile, Neal does the same to convince Sara to help them. He claims that they only need her equipment, but she says where her equipment goes, she goes. She finally agrees to help when Neal says that he will owe her a favor.

After this episode, Neal and Burke go on a pursuit to catch the ruthless killer. After walking about a mile, an action packed fight takes to the show. Between Peter and "the middle man" Peter comes out victorious. Peter mounts his horse and rides with Larson in cuffs. After this tragedy they found out Vincent Adler is the one behind this. Soon after, they are huddled into a car and are ordered to drink something containing sleeping pills. They awake to meet Alex Hunter are shown a Nazi Sub from world war two containing hidden treasures lost long ago.

"There, now it's the Burke's Seven" - Elizabeth