Start a Wiki
The first time we see Keller who become the villain of the series. In this episode Neil must forge a Franklin bottle of wine to discredit Keller at a wine auction. It didn’t happen and Keller becomes a part of the series as a regular guest. 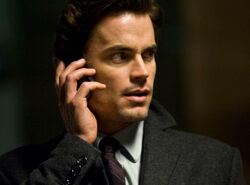 Bottlenecked is the 12th episode of Season 1 of the White Collar and the 12th produced episode.

Peter: "This can't be good."
Hughes: "Why does everyone say that when I walk into their office?"
Peter: "So you have good news?"
Hughes: "No."

Retrieved from "https://whitecollar.fandom.com/wiki/Bottlenecked?oldid=16101"
Community content is available under CC-BY-SA unless otherwise noted.