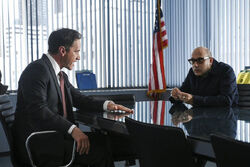 Borrowed Time is the 1st episode of Season 6 of the series and the 76th produced episode.

In an attempt to secure his freedom once and for all, Neal convinces Peter to strike an ironclad deal with the FBI brass. But first, he must gain access to a the leader of an international crime syndicate known as the Pink Panthers. Meanwhile, El is confronted with startling news about her future with Peter.

1155 Avenue of the Americas