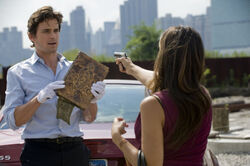 Previous Episode
Threads
Next Episode
Flip of the Coin

On a routine stakeout of a well-known mob hang out, Agent Cruz and Agent Jones get a surprise visit from Leo Barelli, the local mob boss. Someone stole the bible from Barelli's church, and he wants it back ... badly enough to come to the FBI for help.

On a routine stakeout of a well-known mob hang out, Agent Cruz and Agent Jones get a surprise visit from Leo Barelli, the local mob boss. Someone stole the bible from Barelli's church, and he wants it back...badly enough to come to the FBI for help.

Peter and Neal soon discover that this is no ordinary bible. Over five centuries old, the book is rumored to have the power to heal the sick. Peter is skeptical, but Neal knows there are true believers out there. Neal's theory leads them right to the culprit: Steve, a homeless veteran who took the bible to save his sick dog, Lucy.

As it turns out, Steve was actually hired to take the bible by none other than Paul Ignazio, Barelli's nephew. Why would Barelli's own nephew steal from him? Unfortunately, Peter and Neal won't get any answers from Ignazio, who is found dead in the east river. Peter heads down to the scene, but he hits a roadblock in the form of Agent Joseph Ruiz, an old adversary who's heading up the Organized Crime Unit. Peter knows the Ignazio killing somehow leads into his bible investigation, but Ruiz pulls rank. He doesn't want Peter anywhere near his crime scene.

Of course, Peter may have his hands tied, but that doesn't mean Neal has to sit out. Neal and Mozzie investigate Ignazio's apartment and come up with Maria Fiametta, a local art historian who is familiar with Neal's past exploits. Peter thinks Maria has something to hide, but she's just too smart to keep the bible close. If Neal convinced Maria he was coming out of retirement, would she give up the book? There's only one way to find out, but for Peter it means putting all the cards in Neal's hands.

Neal: You know, you look pretty comfy in that FBI windbreaker. Maybe it's time to consider a new career path.

Mozzie: No, I prefer to keep my soul.